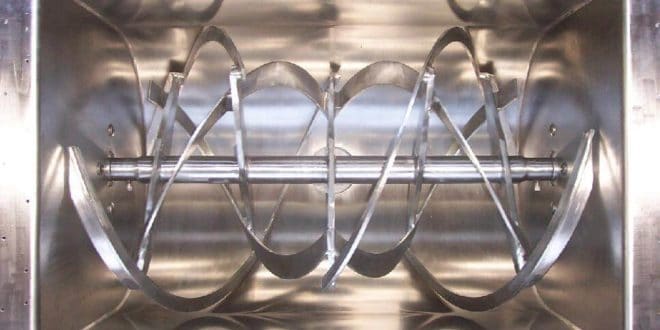 What Is A Ribbon Mixer – Everything You Need To Know

People don’t often think about the process behind things they frequently enjoy. For example, they don’t typically wonder how the cement was made that poured the road they drive on, or how fertilizer was mixed into the bag of soil they buy at the local plant shop. A lot of things in the industry are not lone products, they are mixed in with other ingredients or blended to loosen the consistency. No typical blender could tackle this process, however, it’s a job for a ribbon mixer.

Ribbon mixers are considered to be the backbone of American industry – at least when it comes to mixing. This shouldn’t come as a surprise to anyone, though. Of all the mixing instruments, they are the most popular because their initial purchase cost. Furthermore, the maintenance and production costs per pound of product produced is also quite low. At least when you compare it to other types of industrial blenders.

What’s more, a ribbon mixer can be used to blend almost anything, making them useful in many industries. For example, ribbon mixers are used widely in certain industries such as pharmaceutical and nutraceutical. However, they are also used to produce fertilizer, stucco, clay, potting soils, paint, plastics, chemicals, and many other items.

What Is A Ribbon Mixer?

A ribbon mixer is a type of blending device that is made of a thin steel plate wrapped spirally along a metal cylinder to form levels of metal. This is then lowered into whatever needs to be mixed, such as cement or soil, and does the job.

They can blend a wide variety of products also including, stucco, clay, chemicals, and paint, making them a staple in any industrial trade. The cost of production, purchase cost, and maintenance costs all remain relatively low. This is another contributing factor to its popularity. More people can afford a quality product that is also cost-efficient.

There are two types of ribbon blender, designed to fit the user’s specific needs. The first type is called a “center bottom discharge” and is the most widely used model. This model looks a little like a horse trough, with an opening in the top and in the center of the bottom side.

There is an area where a person can turn on the mixer and it spins the contents inside and they come out of the bottom. The second type is an end discharge, which looks similar and works similar, but the product is deposited at the end of the machine instead of in the center.

As you can tell by now, modern life would look very different without the existence of ribbon mixers. Widely used in many industries, these machines are the reason why we can mass-produce various products. While their design and the way they work isn’t ground-breaking, they are very important. So next time you’re buying certain foods or pouring cement, think about ribbon mixers!

What Is Steel Channel Used For?